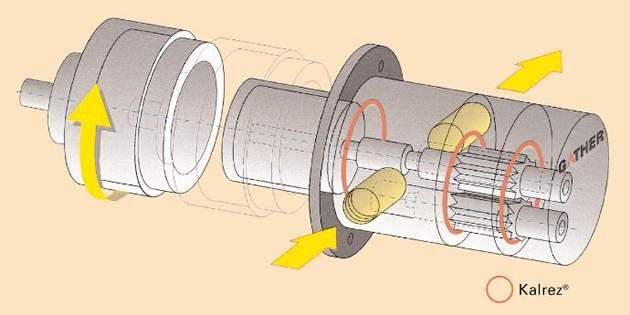 deformation problems at high temperatures in gear pumps designed to operate in temperature up to 300°C and pressure of 100 bar, which was causing leakage at the sealing surfaces and compromising chemical industry safety requirements.

Key markets for pumps, centrifuges and quick-couplings manufactured by Gather are the chemical process and aircraft industries in Austria, Germany and Switzerland. The company’s gear pumps are also used in reactors and other difficult operating environments.

By replacing metal O-rings with Kalrez® O-rings from DuPont in gear pumps designed to operate in temperatures up to 300°C and pressure of 100 bar, Gather Industrie GmbH, Mettmann, Germany, has solved the problem of seal deformation at high temperatures, which was causing leakage at the sealing surfaces and compromising chemical industry safety requirements.

According to Dipl. Eng. Klaus Lübke, the company’s Technical Manager, only Kalrez® O-rings were able to withstand long-term exposure to aggressive chemicals at such extremes of heat and pressure. In numerous other cases, Kalrez® parts fitted up to ten years ago are still working without problem.

Unlike metal O-rings, Kalrez® perfluoroelastomer parts also compensate for the uneven internal sealing forces within the asymmetric gear pumps, maintaining a leak-free seal, explains Mr. Lübke. He also reports that by switching to Kalrez®, pump assembly and dismantling has been made easier, leading to cost savings through reduced maintenance and production down time. As a result, Kalrez® seals are now fitted as standard equipment in most of Gather’s extensive range of gear pumps.

Kalrez® perfluoroelastomer parts have provided superior performance in a wide variety of demanding sealing applications. Kalrez® resists more than 1800 chemicals and is thermally stable up to 327°C.